Of the three novels in the Space Trilogy, I think That Hideous Strength has the most compelling plot and the more interesting themes. I especially like the way Lewis dramatizes the scriptural comparison between sin and sleep:

Often the man knows with perfect clarity that some still possible action of his own will could yet save him. But he cannot make this knowledge real to himself. Some tiny habitual sensuality, some resentment too trivial to waste on a blue-bottle, the indulgence of some fatal lethargy, seems to him at that moment more important than the choice between total joy and total destruction. With eyes wide open, seeing that the endless terror is just about to begin and yet (for the moment) unable to feel terrified, he watches passively, not moving a finger for his own rescue, while the last links with joy and reason are severed, and drowsily sees the trap close upon his soul. So full of sleep are they at the time when they leave the right way. (Chapter 16) 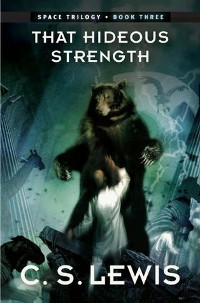 By the time we read this paragraph in the story,  we’ve been with Dr. Ransom as he’s raced to bring a potential ally back from the dead, a man who has the ability to put people asleep to get them out of the way. Surprised that he can’t put Ransom to sleep, Ransom explains, “I am a very light sleeper since I have travelled in the Heavens.” (Chapter 13)

Behind Ransom’s declaration lies two adventures where he has experienced space as an “empyrean ocean of radiance,” gained knowledge from heavenly beings, and learned wisdom through his own choice to put his trust in God, not man. With this simple statement, Lewis gives us an important key to awaking from the sleep of sin: Travel in the Heavens. Or, in other words, throw off the chains of the world and seek the things of God. Immerse yourself in that “empyrean ocean of radiance”  which brings a “lightening and exultation of heart.” Follow the counsel of those who speak for God, such as these words from the apostle Paul in Romans 13: 11–12:

And that, knowing the time, that now it is high time to awake out of sleep: for now is our salvation nearer than when we believed.

The night is far spent, the day is at hand: let us therefore cast off the works of darkness, and let us put on the armour of light.