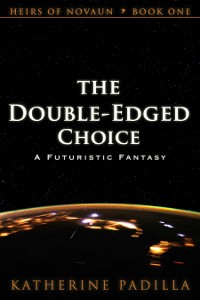 Now ruled by nobles exiled from their home planet Diron, the primitive planet Earth has, in a mere twenty years, risen to heights of technology and power unforeseen by the civilized galaxy. As Earth seeks to expand its dominions, Novaunian agent Daniel Zarek discovers a secret tie between Earth and Novaun. The Earthons kill Daniel to keep him from revealing this terrible knowledge to his people and capture his son Myke.

The Earthons send Myke to serve as a cadet aboard a Star Force base ship stationed on the perimeter of the galaxy to fight the renegade Diron fleets. The only way Myke can escape is to use a telepathic procedure his father invented, but he needs three other people with strong telepathic abilities to make it work. Among the cadets are the mysterious twins Paul and Deia Sheldon. Myke must decide whether they are his most trusted allies or agents for their uncle—Earth’s Director of Intelligence. General faith-based speculative fiction. Read a sample.

Professionally-designed soft cover books and/or ebooks are available at these retailers and others! These ebooks are free in all of the commercial outlets listed below!