The Bond of Charity

Follow Jesus Christ through His ministry and come to a greater understanding of how closely we pattern our lives after His when we serve in the Relief Society.

This is a scripted program geared to women who belong to The Church of Jesus Christ of Latter-day Saints. It contains references to doctrines of the Church and scriptures used by it. 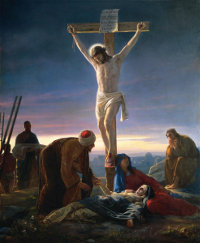 THIS IS A SAMPLE.

. . . charity is the pure love of Christ, and it endureth forever;

Wherefore . . . if ye have not charity, ye are nothing, for charity never faileth.

Charity “is the highest pinnacle the human soul can reach and the deepest expression of the human heart.” Jesus, “out of the abundance of his heart, . . . spoke to the poor, the downtrodden, the widows, the little children; to farmers and fishermen, and those who tended goats and sheep; to strangers and foreigners, the rich, the politically powerful, as well as the unfriendly Pharisees and the hungry, the deprived, the sick. He blessed the lame, the blind, the deaf, and other people with physical disabilities. He drove out the demons and evil spirits that had caused mental or emotional illness. He purified those who were burdened with sin. He taught lessons of love and repeatedly demonstrated unselfish service to others.”

For the perfecting of the saints, for the work of the ministry, for the edifying of the body of Christ:

Till we all come in the unity of the faith, and of the knowledge of the Son of God, unto a perfect man, unto the measure of the stature of the fulness of Christ:

And it came to pass, that, as the people pressed upon [Jesus] to hear the word of God, he stood by the lake of Gennesaret,

And saw two ships standing by the lake: but the fishermen were gone out of them, and were washing their nets.

And he entered into one of the ships, which was Simon’s, and prayed him that he would thrust out a little from the land. And he sat down, and taught the people out of the ship.

Now when he had left speaking, he said unto Simon, Launch out into the deep, and let down your nets for a draught.

And Simon answering said unto him, Master, we have toiled all the night, and have taken nothing: nevertheless at thy word I will let down the net.

And when they had this done, they inclosed a great multitude of fishes: and their net brake.

And they beckoned unto their partners, which were in the other ship, that they should come and help them. And they came, and filled both the ships, so that they began to sink.

When Simon Peter saw it, he fell down at Jesus’ knees, saying, Depart from me; for I am a sinful man, O Lord.

For he was astonished, and all that were with him, at the draught of the fishes which they had taken:

And so was also James, and John, the sons of Zebedee, which were partners with Simon. And [Jesus] saith unto them, Follow me, and I will make you fishers of men.

And when they had brought their ships to land, they forsook all, and followed him.

And it came to pass . . . that [Jesus] went out into a mountain to pray, and continued all night in prayer to God.

And when it was day, he called unto him his disciples: and of them he chose twelve, whom also he named apostles;

Simon, (whom he also named Peter,) and Andrew his brother, James and John, Philip and Bartholomew,

Matthew and Thomas, James the son of Alphaeus, and Simon called Zelotes,

And Judas the brother of James, and Judas Iscariot, which also was the traitor.

And [Jesus] ordained [them], that they should be with him, and that he might send them forth to preach,

And to have power to heal sicknesses, and to cast out devils:

And [Jesus] spake unto the multitude, and said unto them: Behold your little ones.

And they brought unto him also infants, that he would touch them: but when his disciples saw it, they rebuked them.

But Jesus called them unto him, and said, Suffer little children to come unto me, and forbid them not: for of such is the kingdom of God.

Verily I say unto you, Whosoever shall not receive the kingdom of God as a little child shall in no wise enter therein.

Song: “Be Thou Humble,” Hymn 130. (All sisters or special arrangement.)

For the complete Relief Society program, please see The Bond of Charity.