The Virginian: A Horseman of the Plains, by Owen Wister (American classic)

“Still as exciting and meaningful as when it was written in 1902, Owen Wister’s epic tale of one man’s journey into the untamed territory of Wyoming, where he is caught between his love for a woman and his quest for justice, has exemplified one of the most significant and enduring themes in all of American culture. With remarkable character depth and vivid descriptive passages, The Virginian stands not only as the first great novel of American Western literature, but as a testament to the eternal struggle between good and evil in humanity, and a revealing study of the forces that guide the combatants on both sides.” 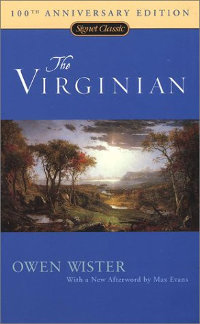 This is one of those novels that has everything—cowboy card games, coarseness, and pranks without much in the way of foul language; action, adventure, and a climactic shoot-out without any gore; and romance, passion, and an incredibly intimate honeymoon scene without any mention of sex. One of the most important events in the book, in fact, is a hanging that happens off-stage. By modern literary standards, this story ought to fall apart. As a proponent of wholesome fiction, I am delighted to tell you that it works! And, by the way, don’t scroll to the end of the novel to read that incredibly intimate honeymoon scene to see what I mean, because that won’t work. (Okay, so I know you’re going to do it anyway, but seriously, you’re going to be disappointed!) The way Owen Wister accomplishes the seemingly impossible is by building a complex vision of the protagonist phrase by phrase, scene by scene. A reader needs the context of the entire book to appreciate that final honeymoon scene.

As entertaining as The Virginian is, it also dramatizes some old-fashioned American philosophy, as played out in this scene from Chapter 12 between the Virginian and the school teacher Molly Wood:

“All men are born equal,” he now remarked slowly.

“Yes,” she quickly answered, with a combative flash. “Well?”

“Maybe that don’t include women?” he suggested.

“Of course I teach them what I believe!”

He pondered. “I used to have to learn about the Declaration of Independence. I hated books and truck when I was a kid.”

“No. I cert’nly don’t. But I used to get kep’ in at recess for bein’ so dumb. I was most always at the tail end of the class. My brother, he’d be head sometimes.”

“Knows his tasks, does he?”

“Always. And Henry Dow comes next.”

“Poor Bob Carmody. I spend more time on him than on all the rest put together.”

“My!” said the Virginian. “Ain’t that strange!”

She looked at him, puzzled by his tone. “It’s not strange when you know Bob,” she said.

“I don’t think that I understand you,” said Molly, sticky.

“Well, it is mighty confusin’. George Taylor, he’s your best scholar, and poor Bob, he’s your worst, and there’s a lot in the middle—and you tell me we’re all born equal!”

Molly could only sit giggling in this trap he had so ingeniously laid for her.

“I’ll tell you what,” pursued the cow-puncher, with slow and growing intensity, “equality is a great big bluff. It’s easy called.”

Molly sat gazing at him, silent.

“I know what yu’ meant,” he told her now, “by sayin’ you’re not the wife I’d want. But I am the kind that moves up. I am goin’ to be your best scholar.” He turned toward her, and that fortress within her began to shake.

Wister expands this American view of “equality” at the beginning of Chapter 13:

There can be no doubt of this: All America is divided into two classes,—the quality and the equality.

The latter will always recognize the former when mistaken for it. Both will be with us until our women bear nothing but kings.

It was through the Declaration of Independence that we Americans acknowledged the ETERNAL INEQUALITY of man. For by it we abolished a cut-and-dried aristocracy. We had seen little men artificially held up in high places, and great men artificially held down in low places, and our own justice-loving hearts abhorred this violence to human nature. Therefore, we decreed that every man should thenceforth have equal liberty to find his own level. By this very decree we acknowledged and gave freedom to true aristocracy, saying, “Let the best man win, whoever he is.” Let the best man win! That is America’s word. That is true democracy. And true democracy and true aristocracy are one and the same thing. If anybody cannot see this, so much the worse for his eyesight.

As I re-read The Virginian this past month, its view of American “equality” reminded me of a non-fiction book I read with my book group back in 2012 entitled The Mainspring of Human Progress by Henry Grady Weaver. Here are a few lines from Chapter 16 of that book that describe in straight-forward terms the western expansion of the United States that is so eloquently dramatized in The Virginian: 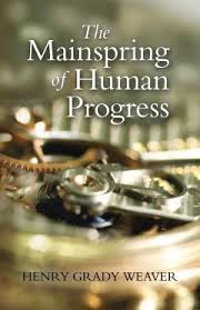 The Mainspring of Human Progress

In America, the planning was to be done on a decentralized, or grassroots, basis. It was a new experiment. Free men were to have an opportunity to live their lives, plan their own affairs, and work with one another—not under the lash of coercive authority, but under the discipline of enlightened self-interest and moral responsibility. . . .

Everywhere you look in American history, you find examples of things seeming to happen by accident—without intention. Americans had no over-all plan. They had something more important. They had personal freedom to plan their own affairs, and the avalanche of human energy resulting from that freedom swept from the Atlantic to the Pacific, from the Great Lakes to the Rio Grande.

When we are in a position of “equal liberty” to find our “own level,” do we choose to use our “human energy” to settle in the comfortable realm of the status quo and become the “equality,” or do we choose to use it to rise to the best that is within us and become the “quality” or the “inequality” that Wister describes? Wister says that “both will be with us until our women bear nothing but kings.” With that in mind, I want to carry this idea one step further and observe that all people born on this earth are “children” and “heirs” of a Heavenly King (Romans 8:17) and can make the choice to follow Him with “all diligence” (2 Peter 1:5), in a “lukewarm” way (Revelation 3:16), or not at all. I believe that as we make the choice to follow our Heavenly King with all diligence, the powerful human energy we use to build His kingdom will be magnified with an even more amazing heavenly energy and Zion will follow.